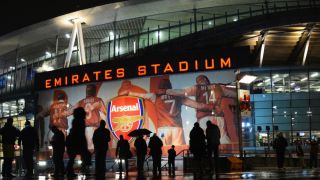 Kolo Toure believes the reason Arsenal have failed to win a Premier League title in over a decade is due to the cost of building a new stadium.

The London-based club played at Highbury before electing to build a new 60,000-capacity ground, which they moved into in 2006.

Arsenal's last league title came in 2003-04, when the club went unbeaten for the whole season - and they have only won four trophies since.

Toure heaped praise on manager Arsene Wenger for his efforts since then, with the club having to drastically reduce costs.

"I am not inside any more but there has been a lot of change. A lot of players left the club, guys like Patrick Vieira, leaders left the club and it was quite difficult, but this policy started when they started the new stadium," the Liverpool defender said.

"Everything changed. They needed to sell some players, cut the wage bill and that is all about it.

"I think they lost so many experienced players. Patrick Vieira was a leader, Robert Pires was a top player, Thierry Henry left and sometimes you need experience at the club and then a young player can learn, that is one of the things."

He added: "Wenger is a top manager, he has shown that unbelievably. The thing I like is this manager can make an average player one of the best players in the world.

"He did that with so many players - [George] Weah... Vieira was in Milan not playing a lot... Thierry Henry was at Juventus and he made him one of the best ever.

"He did that with me because I started from nowhere. He took me to the next level and I always respect him for that."

Arsenal are top of the Premier League ahead of Wednesday's clash against Liverpool at Anfield.