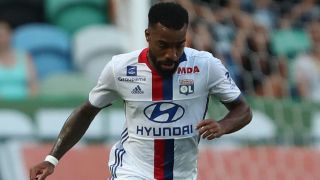 Jean-Michel Aulas has denied reports Arsenal target Alexandre Lacazette is in London to undergo a medical and indicated the Gunners have not met Lyon's asking price for the striker.

According to French publication Le Progres, the 26-year-old centre-forward has arrived in England prior to finalising a switch to Emirates Stadium.

Writing on Twitter, the Lyon president described the story as "false" and claimed Arsenal's initial offer was below the Ligue 1 club's valuation of their star attacker.

Aulas has previously said the Premier League side must part with €65million to prise Lacazette away from Parc Olympique Lyonnais.

"False information from Le Progres about the eventual transfer of Alex L," he tweeted.

A product of Lyon's academy, Lacazette has scored 100 goals in 203 league appearances for Les Gones.