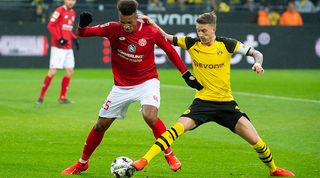 According to Bild, Arsenal are one of several clubs interested in the €35m-rated Ivory Coast international.

Signed from Lens in 2016, Gbamin is now a regular starter at Mainz and has played 25 times in the Bundeliga so far this season.

Unai Emery is keen to improve the Gunners' defence and the club have also been linked to Samuel Umtiti of Barcelona.

The 23-year-old Gbamin, however, could be a much cheaper and more realistic long-term fix for Arsenal, who work within a strict budget.