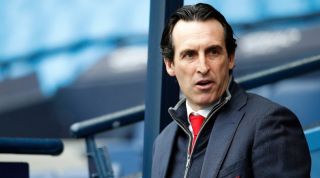 Arsenal threw away a two-goal lead to draw 2-2 against Crystal Palace on Sunday evening, which followed an away defeat to Sheffield United last week.

These most recent poor showings have led to a number of Arsenal fans calling for head coach Unai Emery to be sacked.

However, according to The Athletic's David Ornstein, the Gunners' hierarchy don't believe a reactionary decision on Emery's future is wise.

Arsenal directors were reportedly more concerned about the controversial decision to disallow Sokratis Papstathopolous' second goal of the evening which might have won them the game.

The incident will be brought to the table for debate at a directors meeting set to be held in the Premier League offices on Monday.

Officials believed that fans would also direct most of their anger at VAR, but in the end it was Granit Xhaka who bore the brunt of jeers as he was substituted

Arsenal's captain cupped his ears to the crowd and is even thought to have told them to "f*** off" before taking off his shirt and heading straight down the tunnel.

The Switzerland international's behaviour was later condemned by Emery, who called it "wrong".

Josh Kroenke, son of owner Stan, was in attendance on Sunday while his father was watching their NFL franchise, the Los Angeles Rams, at Wembley.

Kroenke reportedly met with Emery in his office after the game, but it was believed to be nothing more than a routine chat.

Ornstein reports that the board are not likely to make a decision on Emery's future until the end of the season.

They will then decide whether the 47-year-old Spaniard will see out the final year of his contract or whether they activate a clause allowing him to leave after two seasons.