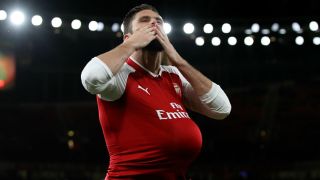 Former Arsenal midfielder Ray Parlour said Olivier Giroud would be the "perfect" signing for London rivals Chelsea, who are looking to provide support to Alvaro Morata.

Chelsea have been linked with surprising moves for West Ham's Andy Carroll and Stoke City veteran Peter Crouch as the Premier League champions attempt to bolster their forward stocks.

Giroud's future at Arsenal is uncertain, having only started one Premier League match this season amid reports of a possible move to Borussia Dortmund in the Bundesliga, and Parlour believes Antonio Conte should look at the France international.

"Whether Arsenal would want to lose another of their players to a rival is another matter.

"But I am sure if Chelsea put a decent bid in he would be tempted because he hasn't got to move, he can live in London, a bit like Petr Cech. He was settled in London and wanted to stay there."

Giroud has scored four Premier League goals in 15 appearances, and seven in all competitions.