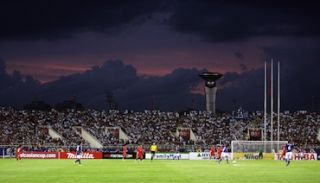 Arsenal would be the first Premier League team to visit Vietnam and while the country's football federation played down concerns the game could be cancelled, they said the price being quoted to use the My Dinh national stadium was too high.

The Vietnam football federation has appealed to the government and local media to pressure the owners to lower fees after they demanded 1.5 billion dong - more than seven times the normal price - to stage the much-anticipated July 17 match.

"The price the My Dinh stadium asked for is too unreasonable," Le Hung Dung, vice chairman of the Vietnam Football Federation (VFF), told Reuters on Friday, playing down media reports that the game could be cancelled.

Arsenal will be the first top flight English club to visit Vietnam, where football is the national sport and attracts a huge following. The north London side will also visit Indonesia and Japan as part of their Asian tour.

Can Van Nghia, director of the 40,000-seat national stadium, said owners were not profiteering from the high-profile game.

"All money is being used to renovate the stadium," he said. "This is a historic game and we have to prepare for that."