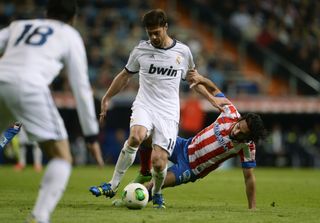 The Bernabeu midfielder is out of contract at the end of the current campaign and has been linked with a host of clubs including Chelsea and Arteta's employers Arsenal.

Arteta feels the Spain international will consider the decision carefully, adding that he will not be short of offers from other clubs if he decides against signing a new deal with Carlo Ancelotti's side.

"I've known him since we were both kids. If he has any doubts about renewing his contract, I'm sure it won't be just for sporting issues," Arteta told Cope.

"It will be because he has concerns about being physically up to it.

"He is a very noble guy. I am sure that he has looked at it from every possible angle and he will have his decision clear in his mind.

"Over here (England), there are a lot of teams interested in him, he could take his pick."

Alonso has made just 11 appearances in all competitions for Real this season after overcoming a groin injury that hampered his pre-season.