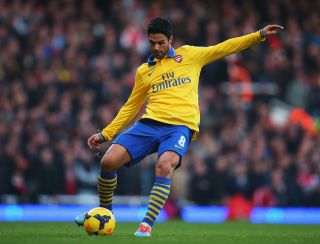 The Emirates Stadium outfit could be usurped at the top of the Premier League on Wednesday after being held to a 2-2 draw at Southampton on Tuesday, with Manchester City and Chelsea looking to capitalise.

Frenchman Mathieu Flamini is set to serve a three-match ban after being sent off against Southampton, Aaron Ramsey has suffered a setback with a thigh injury, Jack Wilshere has lingering issues with an ankle problem and Arteta has also had a spell on the sidelines this season with a calf injury.

It is hardly ideal for Wenger with a February fixture list that includes Premier League and FA Cup encounters with Liverpool, a top-flight fixture with Manchester United and the first leg of the UEFA Champions League round of 16 tie with holders Bayern Munich.

But Arteta is convinced the club can continue their quest for a first major trophy since their 2005 FA Cup triumph, despite the setbacks.

"That happens and we have to deal with it," he said.

"The schedule is really busy now - we have some really tough games coming up in the next two weeks and we have to deal with it and do our best.

"We had many options but that is one problem that we have had in the last few weeks. We have had a lot of injuries, losing Theo Walcott for a long time, Alex Oxlade-Chamberlain is just coming back, too many.

"Tomas Rosicky as well was out for a couple of weeks with his nose so we are a bit short at the moment but hopefully we can get people back.

"We can't do anything (about other teams) - it doesn't depend on us. There is a long way to go.

"Everyone is going to drop points and some will do so here at Southampton because it is a very tough place to come. Hopefully we will be fine."