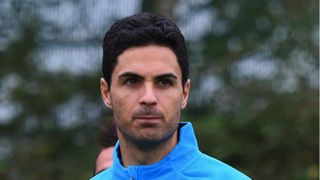 The Spaniard, currently sidelined with an ankle injury, is out of contract at the end of the season – and Arsene Wenger is reportedly keen to extend the 33-year-old's stay for at least another 12 months.

Arteta is focused on returning to full fitness, but he said there would be no delay in him re-signing with the club when they talk later in the year.

"My only aim is to get back fit and try to perform on the pitch," he said.

“As long as I do that I am sure that I will continue with this club, with the relationship I have with the club and the respect I have from everybody here.

"If I don't do that then I am not going to be here because I don't want to be somewhere where I cannot perform at my best and give what I think I can give.

"In May, when everything is fine, we will sit down and talk and it will take five minutes."

Arteta has been out of action since November last year, and Arsenal have jumped into second in the Premier League in his absence.

The former Everton midfielder, however, said he was close to a return.

"I am not far. I have done five or six sessions with the first team and I am feeling good," Arteta said.

"I don't feel I am ready to start, but I'm almost there. It has been a long process, I don't want to rush it."