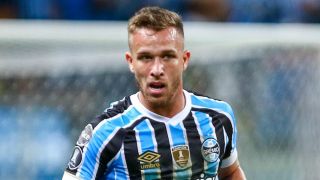 Brazilian midfielder Arthur will arrive in Barcelona ahead of the new season after his transfer to the Camp Nou from Gremio was brought forward.

The 21-year-old was set to become a Barca player in January as part of a deal worth up to €39million, and Gremio president Romildo Bolzan Jr had insisted the promising talent would not be leaving Brazil before then.

At a news conference, Gremio's executive director Andre Zanotta confirmed the transfer was complete apart from "small details", an agreement to bring the move forward having been reached.

"Gremio and Barcelona are closing the sale of Arthur, missing small details that will be ready tomorrow," Zanotta said on Friday.

"Arthur will travel to Barcelona this weekend.

Arthur, who played for Brazil at under-17 level and has been part of the matchday squad for the senior national team, paid tribute to Gremio for giving him a start in football.

He reflected fondly on the memory of winning the Copa Libertadores, but said of his move to Spain: "I'm realising a dream.

"My exit has been transparent, I'm very happy with how it went, my departure has been good for all parties.

"Barcelona asked to advance my transfer to this summer, I did not participate in the negotiations, nor did I participate directly in my transfer - it is a matter between the two clubs.

"My trip to Barcelona will probably be this weekend. I'm very happy to wear the shirt of the club where I dreamed of playing, it's the biggest in the world."

He added: "I wanted to do this last press conference, for the love I have with the Gremio fans.

"It has been seven years of hard work and the Arena Gremio is one of the places where I like to be most. I will be eternally grateful to everyone here. This is a see you later and not a goodbye, I hope to come back one day.

"[Gremio] will continue to have a great team without me."