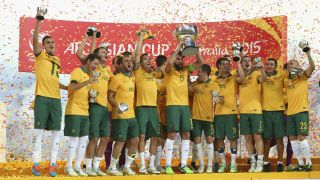 Asian Cup holders Australia have been grouped with Syria, Palestine and Jordan in the group stage for the 2019 tournament.

Australia beat Syria in a play-off to qualify for the 2018 World Cup, but the Qasioun Eagles have been given a chance to get one over on the Socceroos.

Japan, seeking to add to their record four Asian Cup crowns, will face Uzbekistan, Oman and Turkmenistan in Group F, hosts United Arab Emirates take on Thailand, India and Bahrain in Group A, while China and South Korea are in Group C along with Kyrgyzstan and Philippines.

The 2019 Asian Cup has been expanded from 16 teams to 24 nations for the first time, with the competition set to run from January 5 to February 1.

Here's the complete Final Draw! Who do you think will be champions?  May 4, 2018