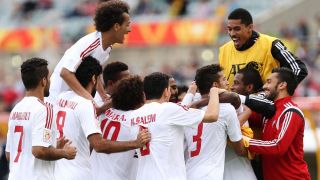 Mahdi Ali's men had to come from behind to thrash Qatar 4-1 in their opening Group C game, setting themselves up for the tournament.

Ahmed Khalil and Ali Mabkhout both struck braces for the victors, who were clearly the superior team in Australia's capital.

Omar Abdulrahman was creative in midfield and continues to be a player to watch at the tournament.

A win against Bahrain, who were solid in a 2-0 loss to an impressive Iran, would see UAE close in on a last-eight place.

Ali's side did offer Qatar plenty of opportunities, and defensive improvement will undoubtedly be a focus in the lead-up.

Bahrain are more than capable of punishing mistakes from UAE.

Striker Jaycee John Okwunwanne has scored 21 international goals and was lively up front against Iran, while Sami Al Hussaini was also bright.

After that loss, Bahrain coach Marjan Eid rued his team's mistakes but he looked ahead to more winnable matches.

"We lost three points but my players did a good job," he said.

"We will have a chance in the second and third matches."

Bahrain desperately need to take something out of the clash against UAE, who will be full of confidence after their strong opening win.