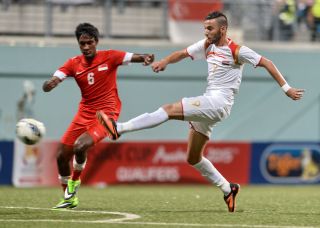 Bernd Stange’s side built on their recent friendly victory over Laos to record back-to-back victories and begin to put three straight losses, including a 6-1 thrashing by China, behind them.

Khairul Amri and Gabriel Jun Yi secured a crucial three points for Singapore as they moved above Syria into third place in Group A at the halfway stage.

Raja Rafe halved the deficit in the final minute but the hosts were able to hang on and give Stange his first competitive win as coach.

The hosts looked threatening early on and tested Mosab Balhous with a Safuwan Baharudin header, the goalkeeper pushed the ball towards Shahril Ishak but he failed to convert.

Syria also went close through Ahmad Al Douni and Omar Khribin, but it was Singapore who broke the deadlock in the 62nd minute.

Amri met a low cut back inside the penalty area and made no mistake from close range to score his seventh international goal.

With eight minutes to play, substitute Jun Yi doubled the lead with his first international goal, he was played through by Hariss Harun and confidently fired into the back of the net.

Refe gave Syria hope in the 89th minute with a low shot and Al Douni very nearly secured a point for the visitors in stoppage time but Hassan saved well at his near post.