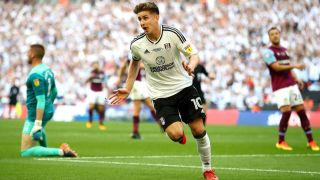 Fulham sealed promotion to the Premier League with a 1-0 win over Aston Villa in Saturday's Championship play-off final.

Tom Cairney's first-half goal was enough to send Slavisa Jokanovic's side back into the top flight, four years on from their relegation, despite Denis Odoi being sent off with 20 minutes remaining.

Just five points separated these teams in the 2017-18 table and there was little to split them during a fiercely competitive clash at Wembley, in which in-form Jack Grealish and Ryan Fredericks were both fortunate to escape red cards.

Cairney's strike deservedly gave Fulham the lead, the midfielder combining with rising star Ryan Sessegnon before finishing with aplomb, and Aleksandar Mitrovic could have doubled the advantage with chances either side of half-time.

Villa improved after the break and were unsurprisingly dominant after Odoi's dismissal for a second yellow card, but Steve Bruce's side created little to worry Marcus Bettinelli in the Fulham goal despite their man advantage.

After winning a game reportedly worth £160million, Fulham can now prepare for a return to the riches of the Premier League, along with Wolves and Cardiff City, while Villa are facing a third-straight season in the second tier.

3 - Ryan Sessegnon has had a hand in all three of Fulham's play-off goals so far this season, scoring one and assisting two. Pivotal. May 26, 2018

Fulham looked the more settled from the outset and deserved to take the lead on 23 minutes, which they did in fine style. Sessegnon manoeuvred into space on the edge of the Villa box and slid the ball between John Terry and Alan Hutton to Cairney, who slotted past Sam Johnstone.

Their early control was put at risk when Fredericks appeared to stamp on Grealish after winning a 50-50 challenge, although the officials did not punish the Fulham full-back.

Steve Bruce's side were struggling to get a foothold in the game and survived a nervy moment when Mitrovic almost stole the ball from Johnstone, while a Grealish shot over the bar was the best chance they mustered before the break.

Mitrovic glanced a header wide early in the second half but there was a marked improvement from Villa, with Grealish deserving better after dancing his way through the defence only to be denied by Bettinelli.

Villa's midfield star was becoming frustrated with his physical treatment, having been fouled six times in the first half alone, and he was the second player lucky not to be sent off after a reckless lunge on Cairney.

The game was becoming more and more ill-tempered and Odoi took things a step too far, his poor challenge on Grealish earning him a second booking, having received a first-half yellow for a foul on the same player.

Villa poured players forward to try to take advantage but the equaliser eluded them, allowing Fulham, who missed out on automatic promotion by just two points, to celebrate in the London sunshine.