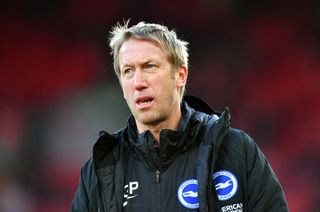 Villa head to the AMEX Stadium sitting inside the bottom three having won only two league games since the start of December.

The Seagulls are three points clear in 14th place but a run of one win in seven needs to be addressed to prevent them slipping into the mire.

Despite the need for both sides to turn their recent slumps around, Potter refused to label the clash as a ‘six-pointer’.

“I think it is a dangerous way of looking at it,” he said.

“Because if we win, or Villa win, and it is the only win we get (for the rest of the season) then we are in trouble, that’s the reality.

“It is about getting the points over the season, the situation for us doesn’t change. We know where we are at and we fight for every point.

“That doesn’t change but as the season goes on the external pressure and the noise is heightened.”

Potter also rebuffed suggestions his team have been unlucky in their latest fixtures as the former Ostersunds and Swansea boss looks for a positive outcome this time around.

“It is more than that (being unlucky). Football is quite simple – you have to score more goals that the opposition and if you don’t, you don’t deserve to win,” he said.

“We’ve had some good performances and in the last four games we’ve picked up four points against Tottenham away, Everton away, Chelsea at home and Bournemouth at home – that is probably on par with where we are.

“The margins in the Premier League are so small, it is not easy to get points and that is the reality. Every win and every point is really valuable.”