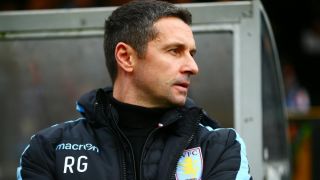 Remi Garde has confirmed Aston Villa are set for a complete squad overhaul at the end of the season.

Villa are last in the Premier League and look set to face relegation for the first time in the competition's 24-year history.

The side are without a win in the league since the opening day of the season in August, and have amassed just eight points from 20 games.

Garde, who took over in November following the sacking of Tim Sherwood, is prepared to offload several under-performing players.

Asked whether the squad needed a complete overhaul, Garde said: "In the long term, for sure. But January is not the best time to do things.

"Some players won't be involved any more and they need to leave. It's very difficult to have brought players here for at least three or four years and pay them to leave. That's not always easy to do.

"Attracting players in the situation we're in is not an easy task either. Players are not only attracted by money - they care about the project you are presenting to them.

"They are not saying they don't like the project and they are not afraid of it but they are waiting for better opportunities before saying yes to me."

Garde also revealed he has missed out on targets due to Villa's dire situation.

"Some players say, 'I would like to work with you', but they prefer to wait," he added. "It's frustrating but I knew things could be like that."