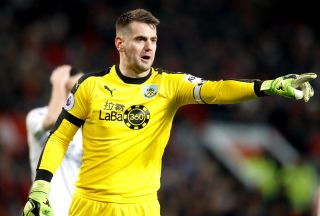 Aston Villa have completed the signing of goalkeeper Tom Heaton from Burnley.

The 33-year-old moves to Villa Park for an undisclosed fee, reported to be £8million, and becomes the latest name on a long list of new arrivals since Villa won promotion back to the Premier League in May.

“I am delighted that Tom is joining Aston Villa,” boss Dean Smith told the club website. “He’s done fantastically well for Burnley over the past few years and his experience and knowledge of the Premier League will be a major asset to us this season.”

Heaton, who was entering the final year of his contract at Burnley, made nearly 200 appearances for the Clarets after moving to Turf Moor from Bristol City in 2013.

He started his career at Manchester United, where he had several loan spells, both in England and at Royal Antwerp in Belgium, before joining Cardiff on a permanent deal in 2010.

Heaton, capped by England on three occasions, follows the likes of Tyrone Mings, Wesley Moraes and Douglas Luiz in moving to Villa Park this summer.