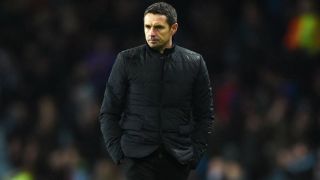 Remi Garde is keen for Aston Villa not to get carried away ahead of Saturday's clash with Premier League high-flyers Leicester City after the bottom club finally claimed a first win under the Frenchman.

Garde's maiden victory as manager of Villa came on Tuesday as a blunder from Crystal Palace goalkeeper Wayne Hennessey handed them a 1-0 success, ending a 16-match winless streak in all competitions.

Villa remain eight points adrift of safety, though, and are huge underdogs to claim a second-straight win versus a Leicester side level on points with leaders Arsenal at the top of the table.

And Garde is under no illusion as to the scale of Villa's task this weekend, telling the club's official website: "The players were very happy in the dressing room [after the Palace game] as you can imagine.

"But they can't afford to be too happy for too long because we have another very important game coming up here against Leicester.

"It was important to win but every game is different - and the Leicester match will be a different challenge for us.

"I was, of course, very pleased to be fair with the way we played football against Palace - I thought it was very entertaining. I thought we had an attacking spirit - and I liked that.

"The 11 players also worked very hard for the team. Everyone was focused on the strategy I put forward for the game. They were very concentrated on that.

"Now we hope we are building something. But it will be very tough against Leicester because they have quality players. It's about recovering and preparing very well for the next game."

Villa forward Gabriel Agbonlahor is still struggling with a back problem while midfielder Jack Grealish has missed the last two games through illness. It remains to be seen if Alan Hutton and Carlos Sanchez will shake off hamstring injuries in time to feature.

Leicester remain without Jeffrey Schlupp because of a hamstring complaint and Ranieri has been quick to urge calm despite their lofty position in the table.

He told Leicester's official website: "It's important to see now how we respond at Aston Villa. If we make a good result at Aston Villa then we can say yes we are confident, but also that we keep our feet on the ground."

- Aston Villa have won only four of the 19 Premier League match ups with Leicester (D8 L7), but they have won three of the last four at Villa Park (W3 L1).
- Since scoring in 11 consecutive Premier League games, Leicester's Jamie Vardy has managed one goal and six shots on target in seven matches.
- The lowest points total for a Premier League side after 21 games who still avoided relegation is 12, set by West Brom in 2004-05. Villa have 11 points.
- Leicester's N'Golo Kante has made the most tackles (85) and interceptions (83) in the Premier League so far in 2015-16.