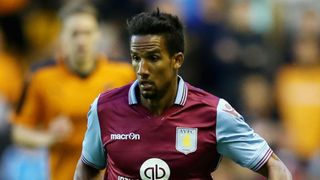 Scott Sinclair is eager to carry his cup form into the Premier League when Aston Villa host Sunderland on Saturday.

The winger scored a hat-trick as Villa picked up a 5-3 win over Notts County to reach the League Cup third round in midweek, although the top-flight outfit needed extra-time to see off their fourth-tier opponents.

That result came off the back off a disappointing 2-1 reverse at Crystal Palace and Villa are now chasing their first league win since the opening day of the season.

"I'm really looking forward to our game this weekend," Sinclair told the club's official website. "We're looking to bounce back from the defeat at Crystal Palace.

"In our respective Capital One Cup matches on Tuesday, they were involved in a nine-goal game [winning 6-3 against Exeter City] while we had eight goals in our tie.

"Both teams were both going at it and we hope to do so again this weekend.

"Sunderland are looking to get their first league win but I believe if we play the way we know we can play, we can create the chances to get the three points.

"But we know it will be a tough, tough game."

Sunderland's last league outing - a 1-1 home draw against Swansea City - represented a marked improvement on dismal showings in their opening two fixtures, but Sinclair says Villa are determined to head into the international break with a victory.

"It's our final match before the international break," he added. "From my experience, psychologically it's so important to win the game beforehand.

"When members of the squad go away to represent their countries and the rest of the lads are back at Bodymoor working, it's a couple of weeks before we all come back together.

"It's a long time before the next game, especially if you haven't got the desired result. If you've won, everyone returns in a jovial mood and is buzzing. You're then ready to go again.

"I believe it makes a massive difference."

Sunderland head to Villa Park with the undesirable record of having scored just one goal in their last seven matches against the Villans, while the fixture has produced five red cards in the last five matches.

Adama Traore, whose cross led to a Pape Souare own goal against Palace, is a doubt for Villa after picking up an ankle problem in the Notts County fixture, while Jeremain Lens (knee) - an influential figure against Swansea - is Sunderland's biggest injury concern.