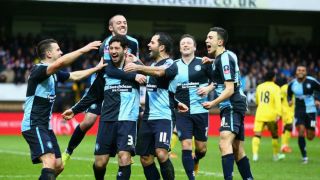 League Two side Wycombe have the rare opportunity to showcase their talents at a Premier League stadium having secured an impressive 1-1 draw against the top-flight strugglers at Adams Park.

With fans facing a near 100-mile trip to Birmingham, Howard penned an open letter in local media asking businesses in the area to allow supporters to end their working day early.

Howard has even offered to enter any company that takes part into a prize draw to use an executive box at a home Wycombe league match.

"That roar you heard at 2.30pm on Saturday [in the first match] was the celebration of a major achievement by your local, supporter-owned football club, holding Premier League Aston Villa to a draw in the Emirates FA Cup third round at a sold-out Adams Park," the letter read.

"The club was buoyed by the support of so many local businesses showing the colours leading up to the match and needs the support of the town once again for the replay at Villa Park on Tuesday night, where close to 5,000 Wycombe fans will be giving everything to hopefully inspire the team into fulfilling the dream of reaching the next round.

"We need your staff there with us. We're closing our office early to allow Wycombe Wanderers employees to travel up to watch the game. We would like your help to be the office hero by doing the same and letting your colleagues get to Villa Park."

The teams may ply their trade at opposite ends of the professional game in England, but Wycombe - sixth in League Two - proved a match for rock-bottom Villa in Buckinghamshire.

There have been signs of improvement since then, though, with Remi Garde earning a first win as Villa boss against Crystal Palace on Tuesday before they secured a hard-fought 1-1 draw against high-flying Leicester City on Saturday.

Villa's position remains perilous and they are nine points off safety, but Garde feels his side are improving as they adapt to his methods.

"When you don't have pre-season with your team and your players, it's more difficult," he said.

"If pre-season was useless we'd just have a meeting before the first game of the season and say 'let's go.' I didn't have this time.

"My face was new in the dressing room. And it doesn't take hours to put things right."