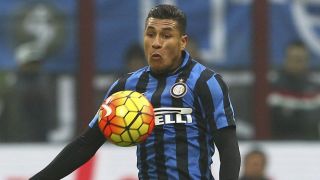 Inter defender Jeison Murillo has urged his team-mates not to dwell on their surprise defeat to Sassuolo as the Nerazzurri seek to return to winning ways against Atalanta.

Roberto Mancini's men dominated the home game against Sassuolo last Sunday, but a late Domenico Berardi penalty saw them suffer a third defeat in their previous six Serie A games.

They dropped to third place in the table following the defeat at San Siro, level on points with second-placed Juventus and trailing new leaders Napoli by two points.

Murillo knows all is not lost just yet, though, and has told his team-mates to rediscover the momentum they enjoyed earlier this season.

"Every game is different, as is the way you prepare for it," Murillo told the official Inter website.

"The only thing we can do is move on and not think about matches that are in the past.

"We deserve to have as many points as we do, but let's keep working hard."

Inter have cause for optimism heading into Saturday's game at the Atleti Azzurri d'Italia, having won their last three Serie A meetings with Atalanta, conceding only one goal.

Stevan Jovetic's stoppage-time goal was the difference between the teams as Inter won 1-0 in August at the Giuseppe Meazza.

The confidence of Edy Reja's team meanwhile will have taken a hit in recent weeks.

Atalanta have lost their past four games in Serie A and have not won since overcoming Palermo 3-0 on December 6.

The last time they lost five consecutive Serie A games in the same season was in January 1996.

The Bergamo-based club's recent slump has seen them drop to 11th place in the table with 24 points from 19 games and they will be desperate to avoid becoming involved in a relegation battle. They are nine points clear of 18th-placed Frosinone heading into this weekend's action.

- In 10 of the last 11 meetings played in Bergamo between these two sides, both teams have scored.
- Inter have not scored in the first 15 minutes of play in Serie A this season, while only Bologna have conceded fewer goals than Atalanta (one) in the same period.
- German Denis has scored seven goals against Inter in Serie A: he has not scored more against any other side.
- Fredy Guarin has scored three league goals against Atalanta, more than against any other team in Serie A.
- Inter have conceded only one goal from outside the box this season, the lowest total from any Serie A team in 2015-16.
- In their last game against Sassuolo, Inter failed to score after finding the net in 10 games in a row.