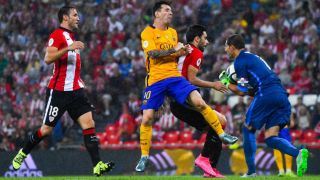 Luis Enrique says Barcelona are prepared for a hostile reception at San Mames when they take on Athletic Bilbao in the Copa del Rey quarter-final first leg.

The Liga champions thrashed Ernesto Valverde's side 6-0 on Sunday at Camp Nou after Gorka Iraizoz's early red card left them with a mountain to climb.

That clash was the first of three between the sides in 10 days, with the first leg of their Copa tie played in Bilbao on Wednesday before the return leg in Catalonia on the 27th.

Luis Enrique expects a volatile home crowd to have something of an impact upon his players as Athletic look to avenge their weekend drubbing, and has challenged his side to silence the support.

"We're used to playing in hostile environments. The game tomorrow is going to be very different than the one Sunday at Camp Nou," he said on Tuesday.

"No two games are the same. Athletic can use the last game as an incentive.

"We're used to those situations but that doesn’t mean it doesn't affect you.

"We need to use it as a stimulation. The more heated the atmosphere in San Mames, the more we need to turn it around for us."

Barca's hopes of a repeat of Sunday's result would appear to have been significantly dented as they prepare to line up without Luis Suarez and, perhaps, Lionel Messi.

Suarez will be suspended for the game after he was sanctioned for goading Espanyol players in the tunnel in the previous round, while Argentina star Messi remains a doubt for the game due to a hamstring niggle, with Luis Enrique confirming he will wait to make a decision on his availability.

Jordi Alba is also sidelined with a hamstring problem, meaning Sergi Roberto or Adriano are likely to start at left-back given Jeremy Mathieu's calf injury.

While Barca's attack has been blunted, Athletic are boosted by the return from suspension of Aritz Aduriz, who scored four goals across the two legs of his side's Spanish Supercopa triumph against the Catalans.

That result gives Valverde hope that they can recover from their weekend hammering - a result he insists Athletic are not used to - as he aims to reach the last four of a tournament which he won as a Barcelona player back in 1990.

"We have to pick ourselves up. We don't normally suffer thrashings like this," he said. "We're going to exploit our chances of making it through. We normally compete well with Barcelona - our plan is to get up and battle to go through."