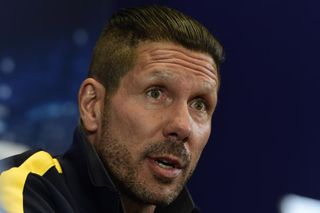 Atletico are four points clear at the top of La Liga and have also exceeded expectations by reaching the semi-finals of Europe's premier club competition.

Simeone expects his charges to be fully focused for Tuesday's first-leg meeting with Chelsea at Vicente Calderon and feels there are many similarities between the two teams.

"We are not the same teams but we have similar characteristics. We are both the least-scored-against teams in our respective leagues, we both have good defences and we both play a direct attacking game.

"We are also both good at set-pieces. These characteristics have led to us both fighting for titles. We just focus on our team but we respect our rivals."

Atletico's regular goalkeeper Thibaut Courtois is in his third season on loan from Chelsea and set to face his parent club following controversy over whether a clause exsited to prevent him playing.

Simeone said the Belgian's mindset is no different to any other Atleti player, with every member of the squad recognising the importance of Tuesday's first leg.

"Thibaut Courtois' state of mind is the same as that of all his team-mates," Simeone explained.

"They are all filled with enthusiasm. They know the importance of this match not just for them, but for the club.

"(At this stage) words do not count, they are just used to make headlines."