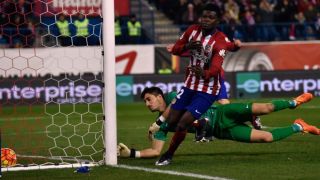 Atletico Madrid went two points clear at the top of La Liga as a blunder from Levante goalkeeper Diego Marino gave Diego Simeone's side a 1-0 win on Saturday.

Defending champions Barcelona's 0-0 draw at Espanyol earlier in the day afforded Atletico the chance to gain a slender lead at the summit.

Fortune was not on Atletico's side for much of the encounter despite the capital city club dominating at the Vicente Calderon.

The hosts struck the crossbar three times, while striker Jackson Martinez squandered a host of opportunities to break the deadlock.

Martinez was withdrawn in the 73rd minute and it was his replacement Thomas who made the crucial impact nine minutes from time.

The 22-year-old's tame effort somehow slipped under the arm of Marino to wrap up all three points and send Atletico first as they bid to regain the title they lost to Barca last season.

It did not take long for Simeone's men to demonstrate their superiority as they quickly began to dictate proceedings, Martinez forcing a smart save from Diego Marino in the sixth minute.

Antoine Griezmann then curled a free-kick over the bar from the edge of the area before Atletico had claims for a penalty waved away by referee Clos Gomez.

Atletico were aggrieved not to have been awarded a spot-kick following Ivan Lopez's sliding challenge on Angel Correa and Levante continued to live dangerously - only the crossbar preventing Stefan Savic from opening the scoring with a near-post header from a corner.

For all of Atletico's dominance they were fortunate not to fall behind when Levante captain Verza powered narrowly wide on the half-hour mark.

Martinez saw an effort deflected off target six minutes later as Levante survived the almost constant stream of pressure to cling on until half-time.

The Colombia forward glanced a header wide seven minutes after the restart and was involved again as the woodwork denied Atletico for a second time.

Former Porto star Martinez chested the ball down for Koke, whose fierce drive cannoned off the underside of the bar.

The profligate Martinez missed the target with a header and Luciano Vietto then hit the top of the bar with a cross-cum-shot from the right wing.

However, Atletico's frustration finally came to an end as Thomas dribbled skilfully into the box, his side-footed shot eluding the grasp of Marino and rolling over the line to give the 2013-14 champions the advantage in the race for the title.