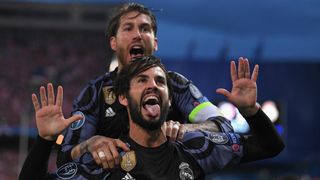 Real Madrid reached a third Champions League final in four years after seeing off Atletico Madrid despite a 2-1 defeat in the second leg of their semi-final tie on Wednesday.

Two goals in the first 16 minutes from Atleti threatened to produce another memorable comeback in this season's tournament, until Isco's strike just before half-time effectively ended those hopes and sealed a 4-2 aggregate win.

The players were greeted with a tifo from the home fans proclaiming 'proud to be different to you' as they walked out onto the pitch for the last European game at Vicente Calderon, but Atletico's electric start was very much in the mould of Madrid's in the first leg.

Saul Niguez thumped in a header with 12 minutes gone before Antoine Griezmann converted a penalty to get Diego Simeone's side believing in a turnaround.

Madrid have made a habit of digging deep to salvage results this term, though, and Isco's finish from close range on 42 minutes – his first in the Champions League this season – handed Zinedine Zidane's side a crucial away goal.

Atleti persevered but there was little real hope in their second-half efforts, as they suffered European heartbreak against their city rivals for the fourth time in as many seasons.

Madrid's hopes of becoming the first team to defend the Champions League remain intact, however, and they will face Juventus – the team Zidane left as a player to move to Santiago Bernabeu, who knocked out Monaco on Tuesday – in next month's final in Cardiff.

Atletico went in hunt of the opening goal from kick-off and it took a fine low save at the near post from Keylor Navas to stop Koke's prodded effort from giving the hosts the lead after only five minutes.

Jan Oblak was equally impressive at the other end to keep out Casemiro's header with a flying one-armed stop, but Atleti's pressure on the Madrid defence told in the 13th minute, as Saul rose highest to power a header beyond Navas from six yards out from a Koke corner.

Madrid's defence had not settled and Atleti took advantage again on 16 minutes. Raphael Varane's clumsy challenge felled Fernando Torres in the penalty area, allowing Griezmann - who missed from the spot in normal time of last year's final - to double the lead, even though Navas got a hand to his effort.

Madrid began to dictate possession without creating much of a threat as the first half descended into a scrappy affair in which five players were shown yellow cards, including captains Sergio Ramos and Gabi, both for dissent.

With three minutes to play before the interval, Madrid's increasing control bore a priceless away goal. Karim Benzema's magnificent footwork saw him beat three players as he cut into the area from the left, and although Oblak saved Toni Kroos' shot from the striker's cut-back, Isco was on hand to turn in the rebound.

.'s seventh ever goal changed the complexion of this tie just before the break. May 10, 2017

The visitors suddenly looked comfortable, with Isco and Luka Modric taking command of proceedings, and another fine piece of skill from the former sent Madrid on their way to a promising attack early in the second half that finished with a wayward first-time strike from Cristiano Ronaldo.

Atleti's attack was lacking the intensity they showed in the first but Navas was needed to stop the home side grabbing another lifeline, making a good low block to deny Yannick Carrasco before scrambling up to turn substitute Kevin Gameiro's rebound wide of the goal.

Madrid had the ball in the net again after Ronaldo scuffed Modric's mishit volley into the bottom corner, only for an offside flag to be raised, before Benzema's diving header rippled the side-netting following a fine Marcelo cross.

A late push from Atleti was not enough to threaten the result as they missed out on a return to the final, while Madrid remain well placed to secure a league and Champions League double.