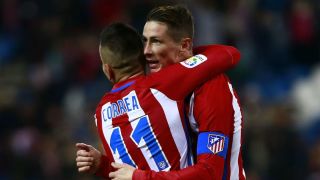 Atletico Madrid made predictably light work of minnows Guijuelo in the Copa del Rey as a 4-1 second-leg win at the Vicente Calderon meant a lopsided round-of-32 tie ended 10-1 on aggregate.

Guijuelo were hit for six in last month's opening game and, although Diego Simeone shuffled his pack, he still sent out an Atletico side with far too much quality and know-how for their third-tier opponents.

Nico Gaitan and first-leg goalscorer Angel Correa got the procession underway before a collector's item arrived in the form of Juanfran's fifth goal on his 278th Atleti appearance.

A man more accustomed to finding the net – Fernando Torres – made it four before half-time, by which point Raul Ruiz's red card had added to the sense of hopelessness surrounding the Guijuelo cause.

They creditably avoided further damage during the second period and found a consolation through substitute Antonio Pino's clever headed finish as Simeone's men eased towards the mid-season break.

In the 15th minute Torres swept over from the left-hand side of the penalty area before Gaitan found the breakthrough in a similar position, after Thomas Partey darted across the Guijuelo area and Correa allowed the ball to run into the former Benfica man's path.

Gaitan was involved when Atleti doubled their lead five minutes later – heading Torres' chip into the box against the crossbar for Correa to collect the ball, cutely turn and rifle into the top corner.

Correa resumed supporting duties before the half hour as he threaded a pass beyond a woefully static Hector at centre-back for Guijuelo, allowing Juanfran to stream forward and emphatically claim a rare goal.

The minnows almost made light of their meagre lot in the 32nd minute when Atleti goalkeeper Miguel Angel Moya saved sharply from Jorge Julia's header, but their situation became even more desperate moments later as Ruiz earned a second booking for dissent.

That decision from referee Javier Estrada Fernandez was derided by a section of the home support, seemingly keen to see something vaguely resembling a contest.

Correa caused further confusion within what remained of the Guijuelo defence in the final minute of the half and a bout of penalty area pinball presented Torres with a close-range finish.

Saul Niguez – starting despite playing 90 minutes and scoring the only goal against Las Palmas at the weekend – planted a header into the turf and over from Gaitan's corner early in the second half.

The Calderon rose to warmly welcome Alessio Cerci in the 61st minute as the Italy winger replaced Saul and returned to the Atletico fray on the other side of loan spells with Milan, Genoa and a knee injury.

A fine reaction stop from Carlos Morales stopped Gaitan from adding his second and attentions had turned towards more meaningful battles in the new year by the time Pino cleverly looped an 80th-minute header beyond Moya.