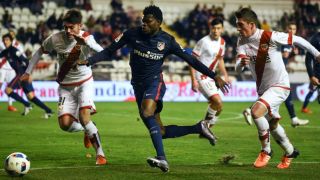 Pablo Hernandez is determined to make a battle of Rayo Vallecano's Copa del Rey second leg with Atletico Madrid despite a dismal run of results.

Paco Jemez's side were beaten 2-1 by relegation rivals Levante last weekend to leave them firmly stuck in a battle to escape the bottom three and they are now without a win since the home Copa clash with Getafe on December 2.

Atletico sealed a 1-1 draw in the first leg of this last-16 tie to give the Liga leaders a slight advantage heading into the return at the Vicente Calderon on Thursday, but Hernandez - who scored in that Levante loss - insists his side can make life uncomfortable for Diego Simeone's men.

"Thursday is a nice game at the Calderon, in what is a tough week. This is the good thing about football, that after a few days you can try to win again," he told the club's official website.

"Although it's the cup and they have a slight advantage, we are capable of scoring at the Calderon and making things very difficult for them."

Atletico followed up the first-leg draw with a vital 2-0 victory away to Celta Vigo on Sunday which keeps them top of the league table after 19 matches, though they have played one game more than champions Barcelona.

Saul Niguez scored the goal at Vallecas to earn the 2013 winners a draw and the 21-year-old is relishing the fixtures to come as the season reaches a pivotal point.

"There's still a lot left of the season and we have to maintain our philosophy of going game by game, because the most beautiful moments of the season are approaching," the forward, linked to Manchester United this week, told Sportium News.

"The important thing is to maintain this positive momentum until the end."

Atletico have a good recent record against their city rivals, having won 2-0 in the league clash on December 30, and their unbeaten run against Rayo stands at six matches.

Tiago (broken leg) remains the only major injury concern for Simeone, though he may opt to rest one or two players prior to the lengthy weekend trip to face Las Palmas.

Simeone has challenged his attackers to sharpen up in recent weeks - Atleti have not scored more than two goals in a game since beating Astana 4-0 in October - but Rayo could represent the ideal opposition to improve that scoring record: they have conceded eight goals across their last two visits to the Calderon and shipped 10 away to fellow city rivals Real Madrid in December.