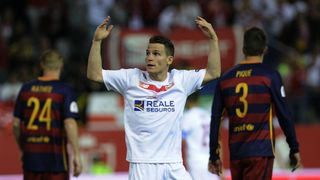 Atletico Madrid have announced that they are set to sign Sevilla forward Kevin Gameiro on a four-year deal.

The France forward will undergo a medical in Madrid on Saturday before the transfer is completed.

Gameiro has been prolific over the past three seasons at the Ramon Sanchez Pizjuan, scoring 67 goals as Sevilla wrapped up a trio of consecutive Europa League titles.

Diego Siemone's side have lost two Champions League finals in that time, but won La Liga in 2013-14.

Sevilla, who also confirmed the loan signing of Franco Vazquez, had been driving a hard bargain over the 29-year-old Gameiro, with president Jose Maria del Nido insisting they would not sell for less than €40million.

No fee was published when the deal was revealed on Saturday.

Gameiro, who has eight international caps, started his career at Strasbourg and made his way to Sevilla via spells with Lorient and Paris Saint-Germain, where he won Ligue 1.