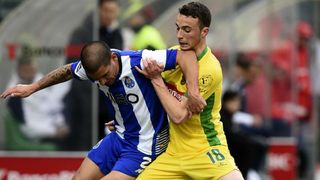 The 19-year-old winger joins the Vicente Calderon club for the next five seasons in a fee reportedly close to €7million.

Jota was named the Portuguese Primeira Liga young player of the month twice in 2015-16 after scoring 12 goals in 31 appearances.

He has represented his native Portugal at various youth levels and is expected to be named in the 18-man squad for the upcoming Olympic Games in Rio de Janeiro.

"To be part of this great club has made me feel very proud," Jota said.

"Diogo has a great projection and stands out for his one-on-one ability and his versatility, because he can play in several positions."

Jota is Diego Simeone's fourth signing of the off-season along with Fernando Torres, Nicolas Gaitan and Sime Vrsaljko.