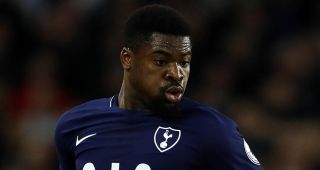 Serge Aurier is determined to break into Mauricio Pochettino's first-team plans during Kieran Trippier's absence from Tottenham's pre-season training sessions, while the manager insisted the club is trying to bring in new players.

Trippier remains on holiday after his exploits for England at the World Cup, but Aurier is with Pochettino's squad for their International Champions Cup matches against Roma, Barcelona and AC Milan and is adamant he will not waste the opportunity to catch the manager's eye.

Aurier made just 16 Premier League starts for Spurs in his first season after joining the club from Paris Saint-Germain but is confident of displacing incumbent right-back Trippier.

"Now is my time," said Aurier. "I have to take my chance.

"If I play good, the gaffer has a choice. That is football. You push. You don't stop.

"For now Trippier is on holiday and this is my moment to take my chance."

Aurier insisted there is no bad blood between himself and Trippier, saying the former Burnley player's impressive form is "good competition for me".

He also revealed his appreciation for English football despite a far from ideal first season at Tottenham, where he has struggled to live up to his billing as Kyle Walker's replacement.

"For me the difference is very, very big. The French people like football but they don't have the time to go to the stadium. English people are not the same.

"I know the Premier League, I know the players, all the people who work in the team. Now I am ready."

Pochettino said Tottenham's pre-season activity in the transfer market was expected to begin soon but warned against the danger of making knee-jerk decisions when signing players.

"The market has only started to move very quickly after the World Cup. Be sure that we are going to do some movement but like always, we're working hard - no rash decisions.

"I'm not worried, I'm happy preparing the team to arrive in the best condition for the first Premier League game."

He added: "Of course I'm very happy with players who have signed new contracts.