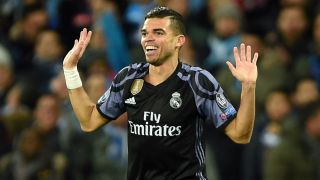 Inter sporting director Piero Ausilio has confirmed that they are considering the prospect of signing Real Madrid defender Pepe.

The Portugal veteran has been linked with a move to San Siro recently as he nears the end of his contract with the LaLiga giants.

Ausilio says the 34-year-old centre-back has been offered to Inter but insists it would be foolish to discuss transfer targets at length until a replacement head coach is appointed.

"If I had to tell you every player we've been proposed lately, we'd have 150 in the squad," he told Mediaset Premium ahead of Inter's Serie A clash with Sassuolo on Sunday.

"Pepe was suggested to us. We can offer a lot of things and we'll take whatever time we need.

"He has qualities. We must reflect on his age but you shouldn't forget what [Andrea] Pirlo did at Juventus when everyone said he was finished.

"I want to make considerations in a vague sense rather than specifically about Pepe because there's absolutely no deal in place."

Stefano Pioli was sacked as coach this week after a run of five defeats and no wins in the last seven league matches.

Chelsea boss Antonio Conte, who has guided them to the Premier League title in his first season in England, has been linked with a return to Italy to take over at Inter on a contract that would make him club football's highest-paid head coach.

Ausilio says Inter have a number of targets but suggested that several could be difficult to tempt given they are already at top clubs.

"When you take an extreme course of action like firing a coach, it's a final, desperate way to get the players thinking that it's down to them now," he said.

"These things happen in football. I'm still convinced, even after bad results, that this is a squad of quality. It has problems, above all in terms of character.

"We know who the great coaches are but they have contracts with major clubs.  We have some ideas, although I won't reveal names.

"It was difficult to fire Pioli, a good man who always gave 110 per cent for Inter. It probably wasn't fair to Pioli to leave him hanging for three weeks amid speculation about when the decision to make a change had been made.

"I want to make it clear the decision was made recently, not three months ago. It was also out of respect for Pioli, giving him the time to find a new situation for himself."