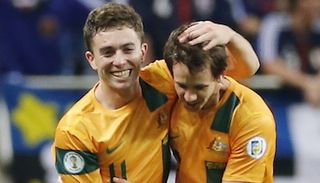 The Bayer Leverkusen-bound winger set up midfielder Mark Bresciano and striker Tim Cahill in each half before scoring himself in the 76th minute.

Captain Lucas Neill then put the icing on the cake by heading home six minutes from time on a chilly night at Melbourne's Docklands Stadium.

The win put Australia second in Asia's Group B qualifying table on 10 points and victory over Iraq in their final match in Sydney next week would seal the second direct berth to Brazil 2014.

Japan are already assured of top spot in the group.

"We played wonderfully tonight but we had a little meeting there and stressed that it's just half the job," the baby-faced Kruse told reporters after terrorising Jordan's defence down the right wing.

"It's a massive game next week so it's important we prepare and do everything we can to make sure we're feeling good."

Jordan, on seven points, will need a home victory over third-placed Oman in their final qualifier and for other results to go their way to keep their hopes of a maiden World Cup appearance alive.

Unchanged Australia, riding a wave of confidence after holding Japan to a draw in Saitama last week, pledged to take the game to the cagey Middle Eastern side and were as good as their word as they peppered the goal from start to finish.

With former Serie A playmaker Bresciano in outstanding form, Australia went close in the ninth minute when defender Mark Milligan fired the ball over the bar.

Goalkeeper Amer Shafi made an excellent save from a Brett Holman effort in the 14th minute although he could do nothing to stop Bresciano tapping the ball in a minute later from two metres out after a right-wing cross from Kruse.

Kruse blew a gilt-edged chance for the Socceroos' second goal four minutes later but made amends by setting up Cahill on the hour mark, the New York Bulls striker heading in from close range.

The 24-year-old Kruse slammed the door shut on 75th-ranked Jordan by turning the defence inside out after receiving the ball on the edge of the area and beating Shafi at the near post in the 76th minute.

Neill scored his first international goal on his 91st appearance for the Socceroos, nodding in from close range to send a 43,000-plus crowd into raptures.

Australia coach Holger Osieck had been under pressure after a stuttering campaign in the final phase of Asian qualifying but the German was all smiles after Tuesday's victory.

"It was a great team effort. We showed great unity... definitely it will give us a lot of confidence for the last game against Iraq," he said.

Jordan will have their fingers crossed that Japan can hold rock bottom Iraq to a draw overnight in Doha and then hope to defeat Oman in order to take third place in the group.

That would offer the chance to qualify via a two-legged play-off against the equivalent finisher in Group A before a playoff against the fifth-placed team in South America.

"I think we had our chances," Jordan coach Adnan Hamad said. "We had problems in defence, that was because of