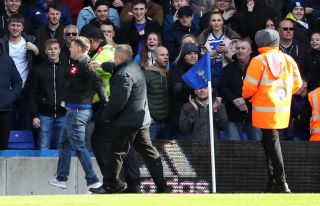 Birmingham supporter Paul Mitchell was given a custodial sentence on Monday after he ran onto the pitch and punched Aston Villa captain Jack Grealish during Sunday’s derby match at St Andrew’s.

Later the same day a supporter ran onto the pitch during the Arsenal v Manchester United game and barged into United defender Chris Smalling.

Arsenal and Birmingham have been charged by the FA over the incidents, and the game’s national governing body has combined with the Premier League and the English Football League to speak out.

“The FA, Premier League and EFL strongly condemn the reprehensible actions of supporters who entered the field of play last weekend,” the statement began.

“English football has worked hard over many years to ensure that our grounds are safe places. Everyone involved in staging a game deserves to enjoy the highest safety standards and we are determined to prevent these standards from being undermined.”

The statement continued: “It is essential that all players feel safe and supported every time they go on the pitch and there is absolutely no place for any type of behaviour that puts this at risk.

“We also acknowledge that the overwhelming majority of fans attend football matches to support their team in a positive manner and we will continue to work with those fans, clubs and stakeholders to generate the best possible atmosphere at games.

“Anyone who attends a match to threaten this principle, either from the stands or by entering the field of play, will face the strongest possible sanctions.

“We encourage all supporters to carefully consider their behaviour, not only at this weekend’s Premier League, EFL and FA Cup matches, but at all games in the future.”