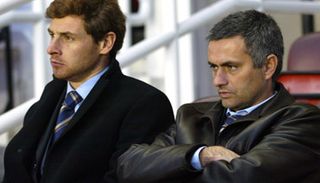 Villas-Boas worked under Mourinho at Porto, Chelsea and Inter Milan before deciding to forge a name for himself by taking on the coaching job at Portuguese club Academica.

Mourinho, who parted company with Chelsea in 2007 having won two league titles, dropped heavy hints this week that he wants to return for a second stint at Stamford Bridge having failed to land the Champions League for Real Madrid this season.

"It's hard to make a reading of the situation," Villas-Boas, whose Tottenham side face Southampton on Saturday then Chelsea next Wednesday as they battle for a top-four finish, told reporters.

"Obviously his desire to come back to England is extremely strong. Whether he has a club lined up or not, I'm not sure. It's very unlikely when someone makes it that public that everything is set up already.

"But he would be a great addition to the Premier League. Jose has a wonderful history in this league and it would be spectacular to have him back," Villas-Boas said on Thursday.

Villas-Boas's career path has been similar to Mourinho's having won the Portuguese league with Porto before moving to England for a brief spell in charge of Chelsea.

Unlike Mourinho, however, his time at Stamford Bridge did not prove successful and he failed to last a season, although Villas-Boas's reputation has been repaired with an encouraging first season in charge of Tottenham.

While Mourinho said this week after Real Madrid's Champions League exit to Borussia Dortmund that he was "loved" in England, Villas-Boas thought it had not always been the case.

"I remember when we left [Chelsea] he was not that loved by some of you [media]," joked the Portuguese. "But Jose was loved at all the clubs where he has won titles and there is maximum respect for everything he has achieved.

"Whether he's reached the level of Real Madrid's expectations, maybe not, but he won La Liga against the dream Barcelona team."