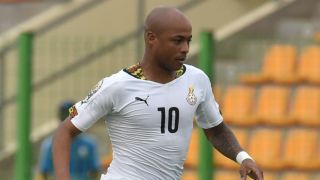 Andre Ayew hopes Ghana can build on their win over Comoros and prove stronger in the third round of World Cup 2018 qualifying.

Avram Grant's side were held to a goalless draw by the 177th FIFA-ranked side in the first leg but avoided a shock elimination with a 2-0 triumph in Kumasi on Tuesday.

Ghana led following Mubarak Wakaso's 18th-minute free-kick but did not add to their tally until Ayew's brother, Jordan, struck five minutes from time with Comoros down to 10 men.

And Ayew hopes the win lays the foundations for a strong third stage that can ensure their place at the tournament in Russia.

"I'm very happy that we won this game," he said.

"It was difficult but in the end we were able to secure the most important thing and win this match.

"We hope to build on this victory and get more wins in our subsequent games so we can qualify for the World Cup."