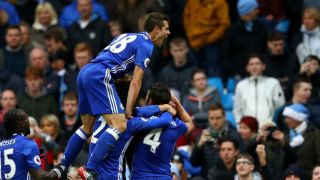 Cesar Azpilicueta has agreed a new three-and-a-half-year deal at Chelsea, the club have confirmed, tying the defender to Stamford Bridge until 2020.

The versatile 27-year-old has impressed during Antonio Conte's first season in charge, operating as part of a three-man defence and contributing to the Blues' march to the top of the Premier League table.

Nominally a full-back, the Spain international has become accustomed to playing on the right side of Conte's preferred backline, alongside David Luiz and Gary Cahill.

The former Osasuna player could make his 200th appearance for Chelsea against Sunderland on Wednesday, having joined from Marseille in 2012.

"I'm really happy to have signed a new contract," he told the club's official website.

"Since I arrived here my target was to progress as a player and win trophies. This new contract gives me the chance to continue my relationship with the club, that's what I wanted and obviously I'm really happy here.

"We've had some really good moments so far this season. From day one, we started working very hard. We have a new manager with new ideas and I'm really happy to be working with him. Obviously we can still improve but the long-term aim for us is to win trophies, that is what we all want, the players, manager and fans."

Azpilicueta won the Europa League in 2013-13, followed by the League Cup and Premier League in 2014-15. He has operated at both right and left-back prior to Conte's formation change this season.

The Pamplona native has been capped 18 times at senior international level by Spain.

Chelsea, meanwhile, hold a three-point lead over Arsenal at the top of the table, having mounted an impressive run of nine successive league victories since going down 3-0 at the Gunners on September 24.

Azpilicueta has more than played his part in that sequence, with the Blues boasting the joint best defensive record alongside Tottenham, having conceded just 11 goals from 15 matches played.