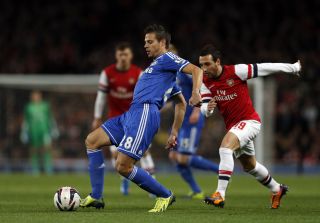 The London club travel to Newcastle this weekend in fine fettle, having won their last six games in all competitions.

Chelsea are second in the Premier League table, on course to progress from their UEFA Champions League group and in the quarter-finals of the League Cup.

And Spanish full-back Azpilicueta believes Mourinho's charges can go from strength to strength under the former Real Madrid boss.

"This league is really competitive and every game is difficult." he told the club's official website.

"We just have to keep working and improving in every game. We are growing up as a team and that is the most important thing."

Azpilicueta scored his first goal for the club in Tuesday night's 2-0 win at London rivals Arsenal in the League Cup.

The Spaniard was making only his third start of the season against Arsene Wenger's side, but the 24-year-old is confident he will play a big part in Chelsea's battle for honours.

He added: "Last season as well I didn't start it playing, but after that I played practically every game.

"This year there is another manager, and at the moment he plays with Branislav (Ivanovic). But I'm training very well and I feel confident with him.

"The season is long and the most important thing is to keep working.

"We have a really good squad, every player can play and give 100 per cent, and we need to keep fighting for titles because we want to arrive at the end of the season with options to win every trophy."