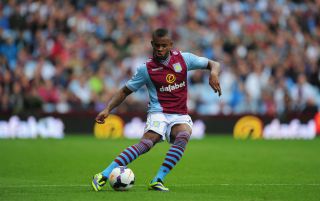 The 22-year-old Bacuna, who joined the Premier League club from Groningen in the close-season, has been employed at right-back by boss Paul Lambert of late, despite having spent the majority of his career in midfield.

And although it would appear that the Dutchman has had little trouble adjusting to his new position after a string of impressive displays, Bacuna has revealed that he sounded out fellow new recruit Luna for advice.

"I've started to look at him (Luna) more now as I'm not originally a full-back but I'm playing there at the moment," Bacuna told the Birmingham Mail.

"I think I can learn from Antonio. He is going up and down all the time - always attacking and defending.

"I will keep improving my own game and maybe I can learn from him."

Bacuna and Luna were part of an overhaul by Lambert during the close-season, with the Villa boss making a string of new signings to help improve on a 15th-placed finish last term.

Villa have started this season in positive fashion, and will be bidding to extend their unbeaten Premier League run to four games when they host Tottenham on October 20.