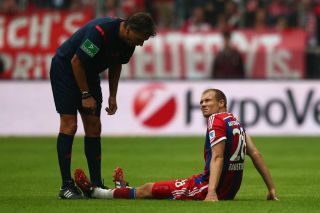 Badstuber was the first of Pep Guardiola's squad to get back on the pitch at Bayern's Sabener Strasse training facility on Sunday, with the rest of the senior team set to join him on Wednesday.

The 25-year-old has not played since September 13 due to torn tendons in his thigh but Badstuber insisted he will be ready for the second half of the Bundesliga season, which begins on January 30 at Wolfsburg.

Badstuber added: "The first workout after a holiday is always a bit tough but it was fun."

The Germany international is desperate to regain a spot in Bayern's starting XI.

"I'm heading into the second half of the season with renewed energy," Badstuber said.

"I'm looking to make best use of the next few weeks and continuously improve, so I recover the level I'd like to have. But I know I'll have to work hard for that."