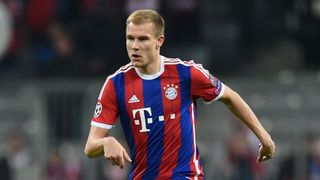 Bayern Munich have received some encouraging news from the treatment room, with Holger Badstuber resuming squad training after a lengthy spell on the sidelines.

The Germany international has not featured for Bayern since picking up a thigh injury in the 6-1 Champions League win over Porto in April.

Badstuber had already resumed individual training and he has now taken the next step in his recovery process, joining his team-mates for parts of squad training on Thursday.

"We are all incredibly happy that Holger is back again," left-back David Alaba told the official Bayern website.

Badstuber, 26, came through the ranks of the Bayern youth academy and quickly became an important member of the first team after he made his debut under Louis van Gaal in 2009-10.

However, a number of serious injuries have restricted his playing time in recent seasons.

He has yet to feature this campaign and made only 22 Bundesliga appearances in the previous three seasons due to recurring knee problems and a torn thigh tendon.

Bayern are away to Wolfsburg in the Bundesliga on Saturday.