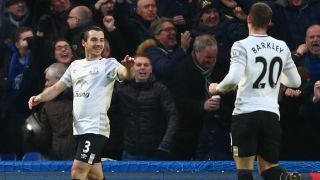 Leighton Baines believes Everton can still force their way into the Premier League's top-four, provided they can manage games better.

Everton are 11th in the table after Saturday's dramatic 3-3 draw against champions Chelsea and sit 10 points off fourth-placed Tottenham.

Chelsea needed a 98th minute equaliser from captain John Terry from a seemingly offside position to steal the much-needed points from Everton, extending their torrid run of form to one league win in nine games.

Baines said that despite their results, Everton have been playing well and are good enough to make the top four this season.

"We’ve only got ourselves to blame for not managing the game well enough really," said Baines.

"We went in front again, 3-2, and threw it away. The goal was offside but we have to manage games better.

"If we’re better at doing that we’re right in the mix for the Champions League but, over the course of the season, you end up where you deserve to be.

"There are positives in how well we played to get 2-0 up. To go to Stamford Bridge and score three goals is great but we weren’t hanging on.

"We just didn’t do well enough for a short spell that the champions are always going to have at home. We’re disappointed in the manner we’ve come away with a point.

"We just hope we can improve because it’s an open league. We’ve got some good games coming up, the Capital One Cup [semi-final, second leg] game as well.

"We want to finish the season as strong as we can and see where that leaves us."