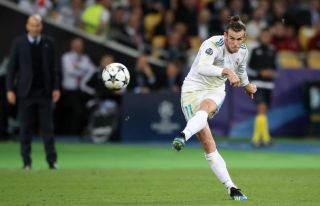 Real Madrid head coach Zinedine Zidane maintains Gareth Bale and James Rodriguez have not “disappeared” and will both be ready to play in the Copa del Rey tie at Unionistas de Salamanca.

Wales forward Bale was not involved for the Spanish Super Cup victory in Saudi Arabia because of illness and then did not feature again on the return to domestic action for Saturday’s win over Sevilla, despite having resumed training.

Zidane, though, insisted the absence of Bale – who has been linked with a January move away – and Colombia international Rodriguez was purely down to fitness issues.

💬 This is what Zinedine #Zidane had to say ahead of our debut in this season's Copa del Rey!#RMTV | #RMCopapic.twitter.com/Mvmhd1bmC0— Real Madrid C.F. 🇬🇧🇺🇸 (@realmadriden) January 21, 2020

“It is not that they have disappeared, they were both injured the other day,” Zidane told a press conference broadcast by the club.

“Gareth Bale is ready to play and so is James. They are both ready.”

Zidane has named a 19-man squad for the round of 16 away game at Las Pistas del Helmantico, where Alphonse Areola could start in goal.

While expected to freshen up his side, Zidane will not take the fixture lightly.

“We are going with maximum focus. We know it is an important competition, like any other,” the Frenchman said.

“We are going to give it our all. The importance is paramount.”

On an unbeaten run of 17 matches across all competitions, Real Madrid are level on points with Barcelona at the top of LaLiga.

Los Blancos, though, will face unfamiliar surroundings against third-tier Unionistas – whose stadium only has one stand, the pitch surrounded by an athletics track and having been covered by a dusting of snow.

Zidane, however, maintains there can be no excuses for failing to produce the required performance.

“All the players started playing, and I was the first one, with bad pitches or with a lot of difficulties,” he said.

“Mentally and sportingly we are ready for anything and we know where we are going to play. It isn’t new for us.

“We are here to do what we have to do and we must always be ready. We know the situation and the opponent – our duty is to be ready.”

Real Madrid have signed highly-rated Brazilian teenager Reinier from Flamengo on a contract until 2026.

Reports in Spain suggest the fee is in the region of 30million euros (£25m) for the attacking midfielder, who is set to initially join Real Madrid Castilla once he has finished playing in the CONMEBOL Pre-Olympic Tournament next month.

Zidane said: “He hasn’t been here with us yet and we have to take it step by step.

“The idea is that he is a player for the future. He is a technically very good player, which is his main quality”.

Zidane confirmed right-back Alvaro Odriozola “has an option to leave”, but that nothing was yet confirmed, with a loan move to Bayern Munich said to be close.

The Real Madrid boss refused to rule out more dealings before the end of the transfer window.

“Until February, anything can happen, both in terms of departures and arrivals,” Zidane said.

Unionistas coach Jabi Luaces, meanwhile, wants his players to enjoy their moment in the spotlight.

“We know what it means to play against Real Madrid, for the city and for us,” he said at a press conference.

“We take it as an opportunity for us and also to make the club known.”