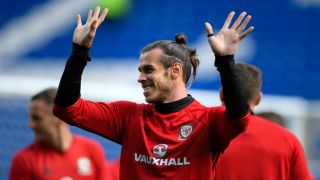 Gareth Bale has replaced Ian Rush as Wales' record goalscorer thanks to a superb hat-trick against China.

Taking to the field from kick-off in Ryan Giggs' first game as boss of the national team, Bale made an swift impact at Nanning's Guangxi Sports Center Stadium by crafting an excellent second-minute solo goal.

Some generous defending from the hosts midway through the first half of the China Cup match allowed the Real Madrid man to pull level with Liverpool great Rush on 28 goals in Wales colours.

A brace from Burnley striker Sam Vokes either side of a stylish finish from Hull City's on-loan Liverpool youngster Harry Wilson piled further misery on China and Bale slotted home to make it 6-0 - claiming the matchball and usurping Rush at the top of his country's all-time standings.

RECORD BREAKER!!!! GOOOOAAAAAAALLLLLLL!!!!! runs through for a well taken goal, which makes him the highest goalscorer Welsh history! March 22, 2018