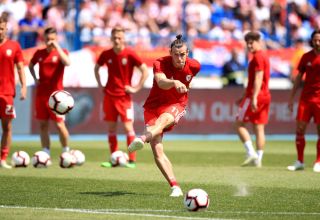 Gareth Bale has broken his silence on his difficult summer at Real Madrid by saying he feels stronger than ever.

Bale looked set to leave Real for a big-money move to China this summer, only for the deal to collapse at the last minute.

The 30-year-old Wales captain admitted the situation was not ideal, but dismissed it as being the most difficult time of his career by saying he recalled “not playing for a year under Harry Redknapp” at Tottenham.

“It didn’t impact on me too much,” said Bale, speaking about his summer of uncertainty in Madrid.

“I don’t listen to them (the critics) because they don’t really know what they are on about. I know most people don’t know the situation, don’t understand the situation.

“Coming back to pre-season, I just kept my head down and worked hard in training. I feel good, probably stronger than ever at the moment.

“The things that happened will stay private with the club. If you want answers, maybe you need to ask Real Madrid.

Bale, speaking ahead of Wales’ Euro 2020 qualifier at home to Azerbaijan, was frozen out by Real manager Zinedine Zidane at the end of last season.

The situation came to a head in July when Zidane said he hoped a deal for Bale could be struck soon “for everyone’s sake”, prompting an angry response from the Welshman’s agent Jonathan Barnett who labelled the Frenchman “a disgrace”.

The planned move to Chinese club Jiangsu Suning collapsed and Barnett said there would be “no makeshift deals” to get Bale out of Madrid.

Following injuries to Eden Hazard and Marco Asensio, Bale has started Real’s opening three league games and, on Sunday, he scored his first goals since March 16 with a brace in the 2-2 draw at Villarreal.

“It’s not been ideal, but I have been here before,” Bale said. “I know how to deal with it.

“But I wouldn’t say it’s the worst time of my career. I remember not playing for a year under Harry Redknapp.

“I have kept my head down, kept grinding through everything.

“I had a good pre-season in terms of training – not so much in games – then started the season well. Things in football, I know, can turn quickly. It’s a matter of time always.”

Bale has been heavily criticised by the Madrid media for failing to speak Spanish and not interacting with the squad at the Bernabeu.

Real goalkeeper Thibaut Courtois appeared to make life more difficult for Bale last season when he said he did not attend a players-only dinner because “he goes to bed at 11pm”.

The Belgium international also said the players called Bale “The Golfer” because of his well-documented love for playing the game.

But Bale said he was happy with the nickname, saying: “I am a golfer. Have you not seen the pictures?

“I spoke to him (Courtois) about it and he said it as a joke. People took it out of context, but I’m very happy with the nickname to be honest. It’s a great one.

“Football is my number one sport. I’m paid to do it and I always give my best. Golf is a hobby, like anyone else would have a hobby.

“There is nothing wrong with having a round. People make a lot of it, but a lot of footballers play it and it’s one thing I really enjoy. It keeps me calmer off the pitch and gives me time away from football, which is nice.”

Wales are looking to their talisman to revive their Euro 2020 qualification hopes after back-to-back June defeats to Croatia and Hungary.

Bale was out-of-sorts in those games and, asked if he felt more settled now, he replied: “I suppose so… the transfer window is closed now!

“I don’t think mentally it affected me at all, but maybe not playing for four, five, six weeks coming into those games, physically, I wasn’t where I wanted to be.

“It was a bit frustrating, but those games are over now and we have to forget about them and look to the future.