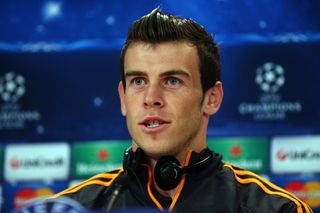 In the first leg last week, Real won 1-0 in Madrid, despite having less than 30 per cent possession, and Bale reckons the Spanish club do not need to replicate those tactics to defeat Bayern on Tuesday in Munich.

Under head coach Pep Guardiola, Bayern have revelled in the Spaniard's tiki-taka possession-based style but Bale wants to beat the Bavarians at their own game.

"We will try to play good football. We are not a team that just defends," the Welshman said on Monday.

"We prefer to go and attack but we have to know how to defend tomorrow as well. We will give our best to reach the final."

Bale cannot wait to get back on the pitch, while he also claimed he was excited about potentially lining up against Bayern left-back David Alaba.

"I feel good and I hope I will play on Tuesday. I'm looking forward to it," the 24-year-old attacker said.

"Alaba is a great player for Bayern. It will be a great and tough battle."

While Bale made it clear Real were confident about converting their first leg victory into a spot in the Champions League final, Alaba warned the La Liga outfit about how tough the trip to Allianz Stadium will be.

In the semi-finals of last year's Champions League, Bayern crushed Barcelona 7-0 on aggregate, winning the first leg in Munich 4-0 in front of a wildly parochial Bavarian crowd, before going on to lift the European Cup.

"You saw what our crowd is capable of last year against Barca," Alaba said.

"Barca went through hell here and I hope the same happens to Real. We need the fans on our side."