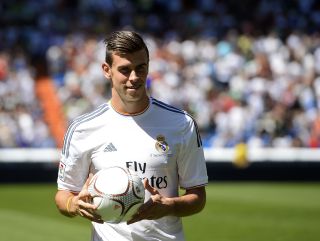 The Wales international completed his big-money switch to the Liga club on Sunday and was unveiled in front of more than 20,000 fans at the Santiago Bernabeu on Monday.

While the fee has not been disclosed, reports suggest that Bale's price tag makes him the most expensive player in history - taking the mantle from Ronaldo, who signed from Manchester United in 2009 for £80million.

However, rather than the pair being in competition, the former Tottenham man believes that he can benefit from playing alongside the Portuguese forward.

"For me, he is the best player in the world and he was a factor for me in deciding to come here," Bale said.

"He is the best player in the world. I want to learn from him.

"I don't think I need to help him to be the best player in the world because he already is."

When asked whether the money Real paid for him would affect his performances, Bale was unfazed.

"(There is) only as much pressure as I put on myself," he added.

"I want to play my best football and to help the team win. The pressure comes from myself.

Bale has signed a six-year deal with Carlo Ancelotti's side.