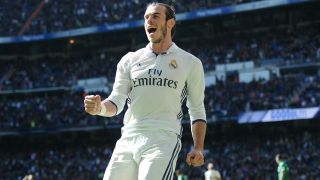 Manchester United would be practically nailed-on favourites to win the Premier League title if they sign Gareth Bale, according to Darren Fletcher.

Bale has been linked with a return to England's top flight amid talk of Real Madrid's pursuit of Monaco star Kylian Mbappe.

United boss Jose Mourinho stated this week that he would be ready to make a move for Bale, who has won three Champions League trophies in four years in the Spanish capital, if he became available.

And Fletcher, a five-time Premier League champion with United, believes the Wales international could transform them into clear favourites to take Chelsea's crown.

"That would put United right up there," the Stoke City man told talkSPORT.

"Not only would they be title favourites, but people would be expecting the title. That is the sort of level that signing is. It is the next-level signing.

"If Gareth could stay fit for a full season and United could sign him, I would personally think that would almost nail them on as favourites for the title."

United face Madrid in the UEFA Super Cup in Skopje on Wednesday.