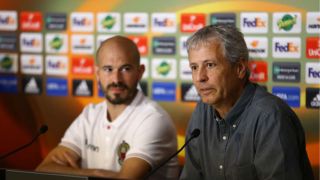 Nice manager Lucien Favre has challenged Mario Balotelli to continue to improve, having hailed the Italian striker's upward trajectory since moving to Ligue 1.

Favre was critical of Balotelli earlier this season after Nice were knocked out by Napoli in a Champions League play-off, but despite praising the recent improvements in his game, the Swiss coach still feels there is more to come from the 27-year-old.

"He has really improved in his movement," he told a news conference ahead of Nice's Europa League clash with Lazio.

"He's becoming more altruistic and effective. He still has a lot of work to do, but we know what that is. He works hard in training, he presses when he has lost the ball. It's a little step forward, but it's an important one.

"But it's not going to be put in place in a year. He needs time. I was already pleasantly surprised by his progress last year, and now he's even more involved in play. He is making a big effort to reach the level required.

"Mario needs support, needs us to speak to him. He needs players close to him because he reads the game well and knows how to make a difference."