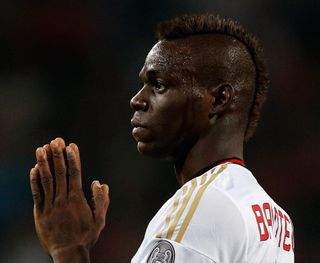 The Italy striker joined the Serie A club from Manchester City during the January transfer window, and went on to score 12 goals in the league last season.

And Allegri believes the 23-year-old is excelling in his role as one of the club's focal players.

"Of course I hope Balotelli can score 30 goals this season," the manager said ahead of the club's opening league fixture with Verona on Saturday.

"But I believe it's better when the goals are evenly distributed among the strikers.

"Balotelli is a player who can score 30 goals. Since his arrival here in Milan he feels like a leader for the first time in his career, because he's an important player for us, with great quality.

"He's a player who can become one of the strongest in the world, it will be only up to him."

Milan earned a 1-1 draw away to PSV Eindhoven in the first leg of their UEFA Champions League play-off fixture on Tuesday, while their league campaign begins with a trip to the Stadio Marc'Antonio Bentegodi to face newly promoted Verona.

And Allegri warned his players against complacency.

"We want to start the season well," he added. "The guys are in a good physical condition, we played well on Tuesday, even though we suffered a little in the first 20 minutes.

"Tomorrow will certainly prove to be a difficult match, Verona are a newly promoted side and there is a real sense of enthusiasm among their supporters and the team.

"They play good football, and are very well organised team. It won't be an easy match, but the three points are important for us and we need to try and win playing well and with care."