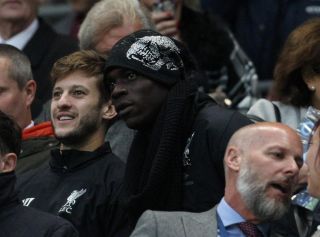 Balotelli, 24, is back in the Premier League after completing a move to Anfield from Milan, having arrived at the northern Italian club from Manchester City.

The 33-time Italy international said he regretted departing the English top flight, despite originally thinking he needed a move elsewhere in Europe.

"I'm happy to be back because I left England and it was a mistake," Balotelli said.

"I wanted to go to Italy but I realised it was a mistake.

Speaking after their 3-1 loss to Balotelli's former employers City at Eastlands on Monday, manager Brendan Rodgers admitted it was a risk bringing in the controversial striker.

"He's a world-class talent and it's an area we need to strengthen. It's a calculated risk, but one where we believe can help him as a player and mature as a young man," Rodgers said, following confirmation of Balotelli's switch to Merseyside.

"I don't have any concerns at all, to be honest. It's that culture that has allowed me to have confidence that if he comes in, it won't be affected."

Rodgers said the culture he has established in his time at Liverpool will ensure Balotelli's presence is no distraction.

"He comes with a reputation, but we hope at our club we can curb that behaviour," the former Swansea City boss said.

"He knows he is part of a team. There are no egos and big-time charlies in our squad. This is a group that's got to the Champions League because they are a team.

"I think there's excitement with them [about him] coming in. I'm certainly looking forward to playing with him. One thing he doesn't lack is confidence.

"He has that belief and football arrogance and the best teams have that. Luis Suarez was brilliant for me for two years but he has moved on and now we like.

Balotelli could make his Liverpool bow away to Tottenham on Sunday.